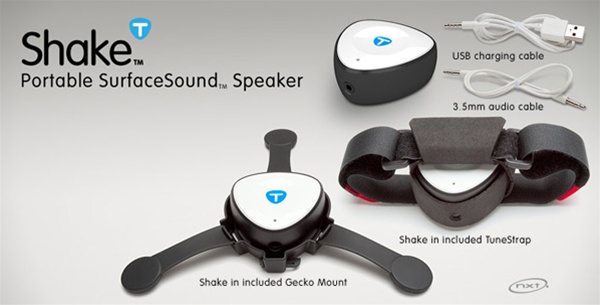 Do you think music will keep you paced and focused on those all-too-familiar
(dare I say, “boring”) training rides?

Wearing earphones is dangerous when operating any kind of vehicle. I don’t endorse riding with one plug in your right ear hoping you can still hear traffic with your left.

So, in the interest of safety (both yours and mine), I am constantly on the lookout for alternatives.

This nifty device, which connects to your iphone or ipod using with either a wire or Bluetooth technology, actually turns your helmet into a speaker!

It’s PC, Mac and USB compatible, weighs only 2.53 oz. and retails for $119 and can be found at http://www.tunebug.com. It can be found elsewhere online for considerably less.  It straps to the top of your helmet with one of two different straps, and has a battery life of 5 hours.

How’d they do that?

I won’t go into a detailed physics lesson about how speakers work.  Just know that all speakers, regardless of size, contain three key components, a permanent magnet, an electromagnet (also known as a coil) and a cone. The tunebug unit contains the permanent magnet and coil.  When attached to a helmet, the helmet is transformed into the cone of a speaker.

Since the Styrofoam of your helmet was designed to protect your head, not conduct sound waves, it’s no surprise that the sound has a somewhat tinny quality. Some of this effect can be altered with a little adjusting of the tunebug to find the helmet’s sweet spot.

The top of the Tunebug has two Braille-type bumps.  When pressed together they turn the unit on and off.  When used individually they increase or decrease the volume. Charging the unit must be done via USB to a computer or other USB AC adapter (not included).

Problems:  If you are using Bluetooth technology to connect to your iphone, be aware that any incoming calls, texts and emails will disrupt the Bluetooth connection, which then must be re-established.

Battery life:  Like all things electronic, the battery life on the unit is significantly less than the five hours advertised.  However, if you’re looking for 90 minutes of playtime, this unit should do the trick.

I wanted this product to be the answer I was looking for.   My most successful experience with the Tunebug was with a hardwire connection to an ipod (not my iphone).  The other riders in my group were not tortured by my choice of music.  (They could barely hear it).  Plus, I was able to hear them as well as traffic.

Only my teenage son told me I looked stupid with it mounted like a box on top of my helmet. His words, “Clearly this does not appeal to the Eurocyclist.” 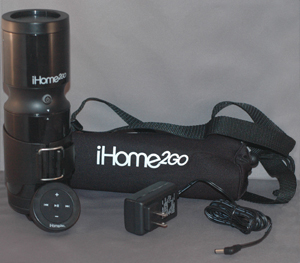