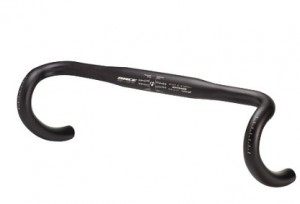 For the six months I rode a Trek 1.2 , the single most outstanding feature on that bicycle was the Bontrager compact handlebars.

Moving from the top of the bars to the drops was effortless, and because of the proprietary 40mm bend in the compact (classic) curve, my small hands were able to reach the brake
levers easily–key components in boosting rider confidence.

The drop and reach on these bars is the smallest of any available, and they are specifically designed for smaller hands. They even come in a 36 cm width and should be widely available online or through your local Trek dealer.   These  handlebars are made of aluminum — unfortunately, they do not come in carbon.

Even after I sold the Trek, and tried and reviewed other handlebars on this site, I longed for the feel of the Race VR-S compact bars and am grateful to Bontrager for giving me the chance to review them!

The MSRP is $49.99 which is a great value. Try them–especially if you have problems reaching your brake levers.

Over a year ago, I reluctantly gave up my shock absorbing Ritchey carbon handlebars to test the Venus alloy handlebars made by Modolo and imported from Italy.

In the interest of serving all petite women riders, I felt compelled to review more handlebar options. Modolo claims their Venus bars are made for people with small hands, with a shape that brings the brake levers nearly 9mm closer.

How could I resist?

I also was intrigued because the Venus handlebars are not an “ergo” bar but rather have a “compact design.”
They retail for  $79.99

The smallest width available is a size 38 cm in a 31.8 mm diameter. If you have an older set-up requiring 26mm diameter bars, they are available in 34 and 36cm widths.

Here’s what I think:

The Venus bars have a medium and reach and drop as compared to the other 38 cm bars on the market, which is a good thing if your hands are more medium sized than small. (Take a look at the info on this page for more info) There is ample room to make micro adjustments with your hands without feeling cramped, particularly in the drops.

Of greater concern is the distance from the bars to the brake levers. My confidence as a rider goes up when I know my stopping power isn’t dependent on the tip of my middle finger.

The following diagram from the Modolo product catalogue shows how the deeper curve of the bars brings the web of your hand 9mm closer to the brake levers. 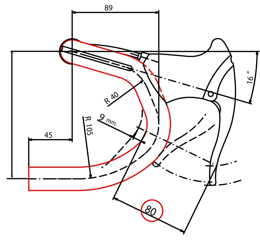 My bike is equipped with Campagnolo Veloce .  To shift gears, I must push down on a lever located on the hoods using my thumb. The placement of that lever is almost as important as the position of the brake levers. The combination of the Campy levers and brakes on the Venus handlebars caused me to experience pain in the basil joint of both thumbs from shifting. I had to move the hoods several times to alleviate the pain.  My perception of the 9mm reach advantage was clouded by this experience.

In all fairness to the bars, this was a problem unique to me (and possibly other people with a predisposition to osteoarthritis in this joint).  It developed over time and may eventually require a switch from Campagnolo to Shimano.

Clearly the Venus design offers a special reach advantage to the levers to make braking with more than one finger possible.  The design offers plenty of room for adjusting your hand positions in the drops. The bars I tested were alloy and didn’t absorb shock like carbon.

The list of available handlebars in the 38 cm width is not long, so by all means add Modolo to your list of handlebars to try when your shopping for new ones. As a side note, Modolo also manufactures the Venus bars in carbon fiber. 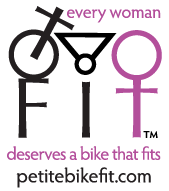